page contents
When a child has the skills to draw, that child has a huge educational advantage. And those who draw what they are learning, no matter the subject will remember it many times longer than those who don’t. Unfortunately, drawing is usually viewed as simply fun and play. 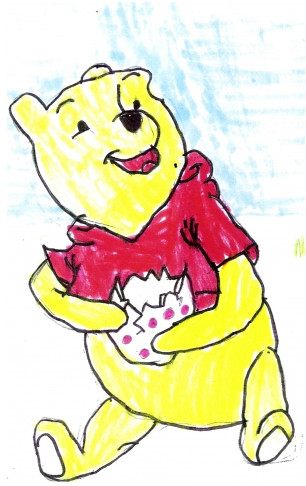 Academic subjects such as reading and arithmetic have been judged, analyzed, and evaluated to the point that they have taken on a large quantity of baggage related to failure and anxiety. Often children who have some difficulty, or who learn better when the information is visual rather than aural have been forced into a learning mode that causes them to struggle. When art is fun, and is taught in a safe and nurturing environment, children and adults willingly give themselves over to it. Learning in such a way also builds skills in other academic areas without the students even realizing it. And, it’s a great way to learn problem-solving! Art is fun, but there are a number of myths about the subject that may unknowingly effect the student’s attitude. It does well for parents to look at them, too. They may affect your expectations and experiences with your own art as well as your child’s art.
#1 If it’s not in your genes, it’s probably not within your reach. Art is inherited, after all.
Not so! You can expect routine success in art from any student of any background as long as they have a desire and a safe environment in which to learn.
#2 People who don’t draw realistically aren’t real artists.

Wrong again. Good artists CAN draw realistically. They’ve studied and practiced to the point where they understand how to look at a vista or object and get it to paper. They know where to put their attention. They are familiar with the tools of their trade. They got good through hard work. But many artists don’t wish to draw realistically. Realism may be the starting point rather than the destination. They find joy in cubism, impressionism or any number of other forms of art. They wish to interpret reality, and add their own touch. Picasso was an accomplished realist artist before he began to explore other forms of expression. The early impressionists also were capable of rendering a life-like image, but preferred to create an impression of light and color rather than the exact image they saw. Artists make choices. Hopefully, they find what provides them with the most enjoyment. It is important in their training that they learn what choices are open to them. They need to be capable of drawing realistically before making most of those choices.

Comparisons of one form with another are not appropriate. Especially inappropriate is a comparison between the symbolic (stick figure) drawing of the young with a more realistic image. Drawing is a form of communication. While the young artists are creating stick figure images, they are also creating a story. They are learning to use the language to express themselves while they are learning to use art to express themselves. They should always be encouraged. You should listen to their story. They will go back and forth between symbolic and more realistic art for some years.

#3 Structured training will damage children’s ability to express themselves.

Nonsense. We don’t expect a child to learn dance, play piano or baseball without showing them the basics. Don’t give them paper and pencil and then withhold the information they need to succeed. But don’t give them so much structure that they can’t win except by doing one thing one way only.

There is no right and wrong way to draw. Even the professional critics can’t agree on what is good or bad art. There is information (structure) that is helpful, but when it is presented correctly and without judgement, it does not interfere with expression.

#4 Art is like recess. It’s a nice break, but has no practical value to children.

What a shame this one exists. It’s this thinking that allows our officials to cut funding for the arts first. Every study I know of has shown conclusively that art contributes to success in every other subject. This is especially true for those whose primary mode of learning is not aural. All children should learn the basics of drawing. If a child learns best when told, “Watch me” rather than “Listen to me” that child should have all the tools that art and visual learning can offer.

#5 Real artists never copy. They draw from their imagination.

This is completely untrue. Landscape artists copy from nature, and they take photographs so they can continue to work on a project after the light has changed or they have gone home. They keep an extensive file of images for reference. Portraitists have their model return day after day. Artists copy other artists, often for years during formal training. We do not allow tracing, but copying is the most effective and efficient way to learn.